At the age of fifteen the father of Russell's girlfriend owned a pub and the D.J hadn't turned up one night and knowing Russ was music mad and was an ardent record collector even at that young age he asked him to fill in. He went down better than the normal D.J and got the gig full time, even though he wasn't old enough to be in the establishment.
After he left school at 16 a UK agent spotted him playing in the pub and offered to represent him to D.J all around the UK but in reality because he had a day Job working for ATV television it was mainly in London and the suburbs although he did do extensive stints along England's south coast from Brighton To Portsmouth. The places varied from clubs & discos to restaurants and pubs where the Elton John single 'Saturday Nights Alright for Fighting' was on replay when he played the latter watering holes.

A while later he was spotted by a big international D.J Agency and signed up. Because the money was so good and he had to go abroad he became a D.J full time, first in Sweden then in Denmark and he was one of the first super D.J's playing very big venues and being treated like a pop star with his name up in flashing lights. He played every single top venue in the whole of Denmark in most of the Key towns before finally turning around the fortunes of a former premier club in the capital Copenhagen that had gone through 8 D.J's in a month but still remained only half full.
After two weeks of Russell's special brew there was a queue around the block to get in and the place once again became the number one club in Copenhagen once more making Russell the number one D.J in Denmark and therefore one of the top D.j's in Europe. He then met and married new English pop Singer Eleanor Rigby, who persuaded him to retire from D.Jing and to become a songwriter and record producer for her which he duly did. (See elsewhere about his career as songwriter and record producer.)

Rare photo of Russell and his missus on their wedding day at the time he was a D.J.

After he divorced from Eleanor Rigby his ex agent got wind of it and he returned to D.Jing sporadically for a number of years on the south coast live circuit along with a few private parties, then had a brief spell as a radio D.J on a short lived South London Radio station.
His final D.j appearance was at the Subterrania in Notting Hill, London, where he also played the last ever Box Office Poison live concert with Misty Woods in November 2001. This night was to be a host of lasts as the main crux of the evening featured many bands who featured on the last ever cut themes album Russ produced 'Cult Themes from the 80's' playing live (6 in all). 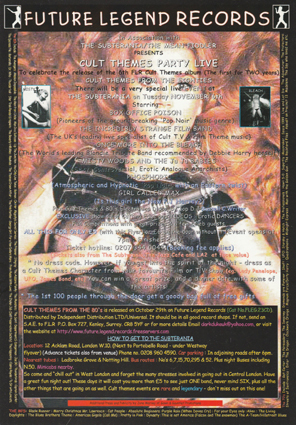 His agent tried to tempt him out of retirement for many a New Years Eves event in particular for the following ten or so years but he stoutly resisted.

Will he ever D.J again? He has dabbled at the odd party where he was a guest to liven things up but says anyone with a laptop and streaming can be a live D.J these days and it takes no skill. Being a top D.J requires a lot of skills and one day he will give the lowdown on what it takes and what it was like to be at the top in what was a very cut throat business. He says he has no desire to ever play live again because he has already achieved that goal. However, he still harbours an ambition to do a radio show as he felt his radio career was prematurely cut short because of his rebel attitude and the fact he played a number of banned songs he wasn't supposed to. As you'd expect from an ultra creative, he has many ideas to make a number of reverting radio shows so in the future who knows. What this space! Naturally this website will be the first to announce it.

Back to main page.