As a Multi-Platform Artist Russell often gets asked the questions in interviews 'If he could only do one art which one would it be?'
His answer is always writing. He feels despite being successful in anything to do with music he feels he was born to be a writer and stories flowed out of him like a broken dam from the age of 13. His brain hurt like a warehouse with no room to spare and he had so many ideas crammed in there before he even left school
Luckily he had a teacher who encouraged him, calling him the most creative writer she had ever taught but at the same time he was the worst speller in the class (But didn't realise at the time he was dyslexic.) Despite this the teacher said others could correct the spelling and once he added life's experiences to proceedings he could go to the top. He quickly learned the format of script writing and novels seemed to come naturally to him after reading the novel 'Valley of the Dolls' by Jacqueline Susan (still one of his favourites.)
Initially he met a film producer Chris Sutton (Who worked for Hammer & E.M.I) who tried to get one of his scripts 'The Confidence Tricksters' made into a film, But without success. Russell then worked at ATV television learning the ropes from Lord Lew Grade. But after falling out with someone else at the corporation Lew advised Russell to go to America and gave him a few contacts. So at just 17 Russell went to Hollywood.
One contact paid off and he sold his first film script 'Star-Struck' . He then approached a famous TV producer 'Chuck Barris' who was well known for something called 'The Gong Show'. Russell had also written 3 episodes of a TV series called '20Th Century Bounty Hunter' But Chuck informed him he only did game shows and said if Russell wrote a game show to come back and see him. Russell took him at his word and as quick as a day later he was back at Chuck Barris Organisation with a music based game show 'The Number One Show' and Chuck bought an option on it for The U.S.
On returning to England Russell also sold and option to ATV. The show was never made but at least he was making headway and earning money as a writer. It looked like the next big break was just around the corner when Russ received a letter from top Literary Agent 'Rosica Collins' shortly after sending in his first novel 'Everybody Has a Once Upon a Time' after returning to London saying 'they wanted to take on his novel and were looking to send it to publishers' but it turned out he was to discover prejudice and snobbery was alive and well and residing in the publishing industry. Upon meeting the agent they decided he was too young at 17 to be an author and although not said directly he could tell the upper class agent was not a fan of his working class cockney accent.
So with this injustice still ringing in his ears better news followed. His D.J career was taking off and he was asked to be an international D.J which he duly accepted. (See D.J page for full details)
The writing took a back seat for a while as far as getting published and getting more scripts sold but he continued to write throughout this period but was then sidetracked after his career took another turn after marrying pop singer Eleanor Rigby and became her record producer and songwriter. (Link to Eleanors page at bottom of page)
So the writing now came in the form of song lyrics but it wasn't long before his writing would make a mark in other areas as he decided to do a fanzine called 'Dedicated Follower'. Initially this was an Eleanor Rigby fanzine but widened out to become a Modzine as he was very much an 'Ace Face' on the Mod scene of the time. It had very respectable sales figures for a fanzine of 3,000 per issue rising to 10,000 once he got a worldwide distribution deal on it outside of the Mod Scene. The prestigious Victoria and Albert museum bought all original issues after Russell called it a day and it is now housed their permenantly. Three one off anniversary issues were released in 2015, 16 and 2019 and all sold out in a few weeks. To his surprise a sudden big demand worldwide arrived for more issues and in and in early 2020 he agreed to bring it back on a more permenant basis.

After Eleanor's disappearance (See Eleanor's page at link at bottom of page) the 90's saw Russell finally get a book published. A chance meeting at a party saw him meet publisher Martin Breese and initially Russell thought to revive his novel 'Everybody Has a Once Upon a Time' but Martin specialised in Non-Fiction but wanted a book about the music industry and since Russell had worked on all sides of it and was always helping people the book 'Music Business Bastards (How to do well in the music business without getting ripped off) was born. Martin Initially wanted to drop the controversial title but Russell held out for keeping it and it paid off with interviews on Channel 4, Radio One and Capital Radio etc and the book did very well. A follow up book was asked for and he was also pursued by other publishers. Since all the interested publishers only did non-fiction he decided he wanted to do a book about British Athletics which is one of his passions rather than another music related book. However after interviewing some Athletes it became near impossible to deal with committees to interview others and there was a deadline to tie in with the Olympics. Russell's music career was also in overdrive as he was now in two bands, running a record label and producing numerous acts (see producing page) So the Athletics book was abandoned.

Russell continued to write songs but books and scripts were put to the back of his mind for ten years while he lived out his music career although he occasionally did some journalistic reviews, interviews & articles for a few magazines, most notably with the legendary Malcolm McClaren and the equally legendary Bill Drummond of The KLF and there was even talk of the 3 joining forces for a band project. However Russell was living live at 100 miles an hours with the record label in particular so that project never happened a Malcolm has since died. 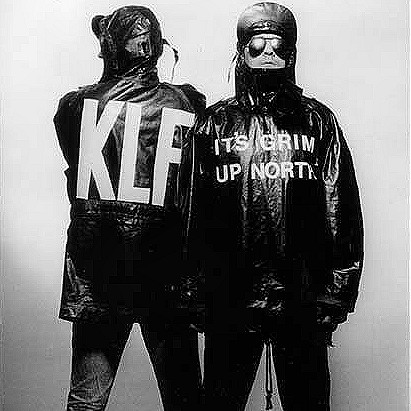 In the mid noughties he finally returned to writing with a vengeance, first writing an autobiography and then three film scripts and a novel. Many say he has lived his life like a dime store novel, the trouble is who would believe such a life (But it's all true and at some point the autobiography will surface) The other problem was he was not a big name and the trend for autobiographies was the TV cash in of a Reality Star or famous person and although Russell has achieve a lot he is not a household name and so there was a lot of resistance to an autobiography.
The scripts however fared much better and Russell received a big offer from Miramax for one but he decided that he now wanted to direct all his work rather than have someone ruin it as is often the case when the wrong people direct and cast films. Miramax then gave advice on what to do next.
He then started to get the ball rolling to get a low budget film done but this was cut short when the pull of music came calling once more. Russell had taken quite a break from music and as an innovator he finds it hard to find compatible musicians and co songwriters but found two in quick succession first doing a single, 'Sex on The Internet' then an album 'Forever Pop Noir' and even some new Bond Themes. Suddenly his new act Psykick holiday became the priority (more detail on Musician/band page)

As we hit the 2nd millennium he became obsessed with getting a new low budget film 'Over and Over' made. This was because Miramax advised him to direct a low budget film before they would back the big film they were interested in doing. Now back in the writing vein he also completed the novel 'Adventures of a Dark Duke: The Pin'. This is based on one of many adventures he had. However as his teacher had said once he experienced life and added that to his imagination he could do something special as a writer. This novel is probably the best example and although it is a fiction novel its more fact than fiction but we couldn't possibly say which is which. All we will say is that it's totally original, very erotic and a gripping story with many twists and turns and like a Russian doll with stories within stories. It is the first in the series. It's on Paperback and Kindle and got 100% five star reviews at Amazon and you can get a special price deal on it at the link below. Three othe novels then folowed in quick sucession 'Kidnaping Time' (based on the film script Miramax wanted, Mixing With The Unknown (based on his horror script) And the book version of 'Over and Over' a music business revenge about to be made into a film.

This flurry of writing activity came about because he was coaxed back to focus on writing books by an old friend Avril who wanted to get back into publishing. However rather than go straight for the novels she thought there was a big market for an updated version of his first successful book 'Music Business Bastard' for today's internet generation musician, so in late 2013 this book was updated and released and proved successful once again.
Unfortunately due to personal problems Avril abandoned 'December Publishing' and it was taken over by Department-F (Hence why all the info is on this website)
He was then sidetracked once more, this time he got heavily into photography where he had also made a name for himself over the years and after discovering a new muse who was on his wavelength, and the resulting stunning photos ended in him being signed up by Saatchi Art. With his photography starting to get very popular he decided he would release a limited edition Photo and Lyric book 'Voyeurs Welcome' which all but sold out very quickly. and now changes hands for 15 times it's original price. .
.

He photo art went from strength to strengt resulting in a big solo exhibition in Mayfair London. and to comemorate this he release Vol.2 of 'Voyeurs Welcome' (See link at bottom of page to grt copy)

He also released a kindle only book 'Beyond The Painted Smile' (which is part mini biog of his early years and part about his new life as a Geisha (Multi Platform Artist). Then came what is probably hs most succesful book to date 'Memories are made of THis (The Ultimate Retro Pop Quiz) 50's to 90's which hit the Amazon top 100 and is exclusive to them. Vol.2 of ths is on the horizon and due for release in Spring 2020. He is currently writing Adventures Of a Dark Duke Follow up for relese in 2021.
However songwriting is at the core of 2020 with a new Psykick Holiday album iminent.

Back to main page